On the 2nd Feburary 2013, elegant Ladies from both the UK and Ireland embarked on Ingarsby Hall, Melton Mowbray for the first ever running of the Bernard Weatherill Side Saddle Chase. It was the first race of its kind to be held since the second world war and was by kind permission of Formula 1 Legend Brian Henton.

The idea was that of well known jeweler designer and sidesaddle rider Philippa Holland. The course was over the famous Quorn Hunt countryside of post & rails and hedges.

Sixteen brave ladies mounted their steeds in the courtyard prior to the race for a photocall and then cantered to the start. The going on the course was soft to heavy in places.

When the flag was dropped there was a mighty charge to the first, where there were 3 fallers but luckily no injuries . The pace began to quicken and coming to the fifth from home all partnerships were still in tacked but two riders Lizzie Harris from the Pytchley Hunt and Susan Oakes from The Meath Hunt started to pull clear. What an exciting finished it turned out to be, both ladies jumped the second last and last upsides but on the way to the line Oakes got her horse O’Muircheartaigh up to win by a length.

The winning rider is world renowned for her sidesaddle endeavors and her horse was a one time top National Hunt racehorse who she now competes regularly on the point to point scene.

The horse is somewhat of a quirky character, he is the only horse running under rules in the Micklem bitless bridle and this was he second time under side saddle. 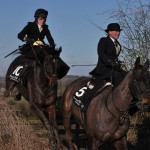 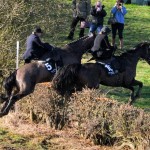 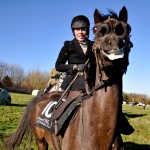 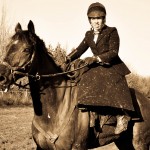 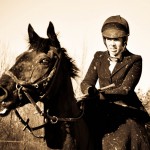 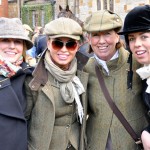 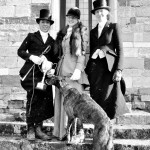 ‘I had the ride of my life, it was a difficult decision whether to bring him or not as he has a mind of his own and it was either going to be a great success or a complete disaster, thankfully it was a great day’. Oakes also added ‘It was a privilege riding along side similar minded Lady riders that like a challenge. I’m delighted with my prize of a bespoke Bernard Weatherill Habit, which in March I will go to Saville Row for first measurments and hopefully this habit will be ready for when I attempt to break my own high jump record in July on SIEC Atlas in Aintree. My inspiration to come here was to follow in the footsteps of the orginal side saddle steeplechaser Mrs Nannie Power O’Donoghue who was the only lady who ever rode in 3 steeplechases in Punchestown, Fairyhouse and Balydoyle in the early 1900’s’.