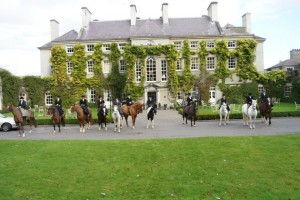 From L-R Maura Mansfield on Prince, Rosemary English on Chad, Evelyn Glynn on Caesar, Sarah Furney on her own cob Cahirmee, Ann Shouldice on her faithful 29 year old mare Lia, Karen Gibney on Big Dave, Hannah Gibney on TJ, Emily Meredith on her own hunter Mac, Claire Madden on Grey Harry, Ann Marie Walsh on her own mare and Rachel Lawlor on Bonnie

Claire’s first Experience to ‘Have a Go’ riding Side Saddle was at the ‘Beginners Clinic’ held in Ardmulchan on the 8th September.

Then nothing would do her but to head for Mount Juliet on Saturday 20th October for the ‘Trail – Trek’ in the fantastic surroundings of the Kilkenny Country Side where under the watchful eye of both Ciara Ryan organiser of the wonderful day and with great guidance and assistance from Susan Oakes.

‘Thank you for all your help last week. You were very nice to me and thank you for letting me borrow Amy’s habit – it is really lovely. Daddy will bring it back to you shortly.

I felt really important and all grown up even though I am only nine when I was all dressed up last week. I had the best day of my life in Mount Juliet  – everyone was kind to me. Ms Oakes helped me to jump on my own – she is GREAT – I want to jump the ginormous wall in the RDS some day just like her.’ 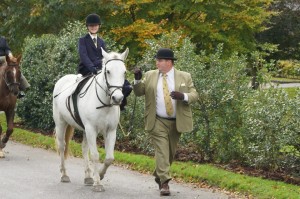 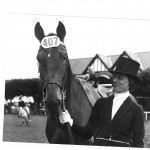 Fania Mahony at the Royal Dublin Society’s Horse Show in the 1960’s where the Ladies Hunter classes were the elegant integral ingredient of the Dublin Show. 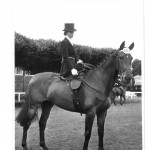 Fania Mahony, born in 1936 in County Derry, was one of the Side-Saddle Association’s founding members, her keen interest in horses developed from an early age. This interest continued on into adulthood where both she and her husband, Denis, set up Carrickhill Stud in Portmarnock, County Dublin, where numerous top class show ponies were bred and went on to great success.

One of her most noted accomplishments was being a very talented side-saddle rider. Her elegance and poise were seen on numerous occasions while she successfully competed at The Royal Dublin Horse Show. Her sad passing in 2007 brought great sorrow to the equestrian world, thankfully her legacy continues on in the Ladies Side-Saddle Class at the annual Tattersalls Ward Union Hunt Show in Ratoath Co. Meath, where the winner will receive The Fania Mahony Memorial Cup ,which has been kindly presented by the Mahony Family.
For any side-saddle rider to have their name inscribed on this beautiful cup would be an honour.

I have always wanted to have a go at side saddle. I love anything steeped in tradition and whenever I watch side saddle showing I always think the riders look so elegant and polished. I’ve never had the chance to have a go until recently. A few weeks ago I spotted an add on the Side Saddle Association Facebook page advertising a ‘Have a Go At Side Saddle’ day at Ardmulchan in Navan Co. Meath. What can I say – I was on the phone like a light to book a place.

On Saturday the 8th of September  I headed over to Ardmulchan with two friends. The weather was glorious when we arrived and the venue was a stunning mix of rolling grassland and immaculately maintained old stables and buildings. The day had obviously attracted a lot of interest as there were twenty other riders there including some who had brought their own horses. Once registration was complete we headed into the viewing gallery of the indoor arena. Gina Galvin, Chairwoman of the side saddle association,talked us through the correct fitting of the side saddle explaining the fit and function of the girth, over girth and  balance strap.

Several horses had been provided for riders to try side saddle on and the first set of riders were invited to enter the arena and mount up. I adopted the role of photographer as three friends were in the first group. This proved a very good idea as I could watch the session and hear the instruction which was something I learned a lot from. Mounting proved an exercise in agility as riders were legged up from the ground and then instructed on how to sit correctly. Susan Oakes provided advice and instruction from the ground. She advised riders to place the weight into their right leg and onto their right hip. Riders were also advised of the importance of bringing their right shoulder back in order to help the horse to balance especially on the right rein.

My one worry when booking the session was that it may be a little sedate and time on the horse might be quite short. I could not have been more wrong. This really was a have a go session with riders encouraged to get stuck in and challenge themselves from the start. Once all riders were established in walk they progressed to trotting in the group and then one at a time. After this all riders were brought into the centre of the arena and sent out one at a time to try a canter on each rein.

The session finished and suddenly it was my turn. The phrase ‘put your right shoulder back’ struck fear into me as it is the most commonly used phrase in any lesson I undertake on a horse. Due to a C curve scoliosis in my back my right shoulder likes to keep itself up and forward if permitted to and I struggle to put weight into my left leg. Well I need not have worried. Side saddle required me to put my weight into my right leg and hip which I can do no problem. Bizarrely when sat on the side saddle I actually found it easier than usually to argue my right shoulder into going back. When asked what sort of horse I liked I said I didn’t mind as I am used to riding all shapes and sizes. I was assigned to a blue and white gelding who was very handsome. Mounting up was not too bad and once I had myself sat into the saddle off we went walking. While the feeling was odd, once I worked the right side of my body I got comfortable and felt quite secure. While many of the riders had found trotting harder than canter, I loved the trot. For once in my life I felt tall and elegant on a horse and I was happy out trotting along. My lovely mount rode nicely on the contact and was so obedient staying out to the wall no problem on both reins.

Canter was quite another story. I was told the horse had ‘a long stride and a big canter’ and indeed he did! I will admit to feeling a little sea sick at this point and was quite aware of being a lot smaller than the horse! However we managed a canter on both reins and I stayed on so I was quite happy with myself. I was stunned to find out that the horse I was riding is just four years old as he was so calm, patient and willing.

At this point we were asked would we like to do anything else and someone mentioned the word ‘jump’. Susan was more than happy for us to try a fence and asked who would like to jump. Naturally myself and a friend were top of the queue like two excited children at pony camp. I was amazed to be allowed to jump on our first time riding in the side saddle but certainly was not going to refuse the opportunity. The jumping position was explained and demonstrated for us and we were advised to lean forwards and to look and lean towards the horses right ear to maintain balance. Off I set towards the fence. Keeping straight with one leg was a challenge but we got there. The horse flew up and over and I felt like I was jumping three feet high. I suspect I used muscles I did not know I had to keep myself on but I made it and was told afterwards that we had taken quite a big jump over it. I came round again and managed a much smoother jump over the fence. The time came to dismount which was harder than it looked. Unhooking our right leg we were instructed to face away from the horse and slide down holding the saddle. At this point I realise I was quite high up and I was not the most graceful to dismount.

We watched the third and final session which proved eventful as some of the riders negotiated not just a jump but a straight pole too. I was amazed at how many riders had brought their own horses that had never tried side saddle before. The horses really seemed to take to it quite easily and willingly which was very interesting to watch. As the last session finished we said our goodbyes and headed off back home. I left the yard feeling on a high having done something I had always wanted to try. I have to say having experienced jumping a small fence I really have gained a new found respect for anyone who jumps let alone hunts side saddle – these ladies are amazingly brave and balanced!

The side saddle association were delighted with the day as they could see how much we all enjoyed ourselves and they had not expected such a high level of interest. The side saddle association would like to thank the Galvin family for the use of Ardmulchan and also to Liz Sanford who fitted the saddles onto the horses that were present on the day. As a result of the success of the day, a follow up session and more ‘have a go’ days are being planned. The association are planning some hacks in Mount Juliet in October so I may just find myself heading on another adventure.

For anyone interested in trying side saddle I would definitely recommend to contact the side saddle association. http://ssaireland.com/