THE FANIA MAHONY MEMORIAL CUP-TATTERSALLS WARD UNION HUNT SHOW, Sunday 29th July.
Fania Mahony, born in 1936 in County Derry, was one of the Side-Saddle Association’s founding members, her keen interest in horses developed from an early age. This interest continued on into adulthood where both she and her husband, Denis, set up Carrickhill Stud in Portmarnock, County Dublin, where numerous top class show ponies were bred and went on to great success.
One of her most noted accomplishments was being a very talented side-saddle rider. Her elegance and poise were seen on numerous occasions while she successfully competed at The Royal Dublin Horse Show. Her sad passing in 2007 brought great sorrow to the equestrian world, thankfully her legacy continues on in the Ladies Side-Saddle Class at the annual Tattersalls Ward Union Hunt Show in Ratoath Co. Meath. The competitors in this class are not only competing for the opportunity to qualify for the prestigious Horse of the Year Show 2012 but the winner will receive The Fania Mahony Memorial Cup ,which has been kindly presented by the Mahony Family. For any side-saddle rider to have their name inscribed on this beautiful cup would be an honour.

We are looking for photo and videos for our website  new or old, funny ones of side saddle it does not matter.

If you have some photos that you would like to share please sent Suzanne at  Baldurgan@eircom.net or honsec@ssaireland.com. Please include details of the people in the photos.

Due to water logging after further rain overnight tomorrow ‘s race meeting at Tipperary Racecourse is off.
Therefore the planned Side Saddle display will now not be taking place
This show is based on the original ‘Spring Show’  held in the Royal Dublin Society grounds with all the agricultural machinery etc in Simmonscourt and the equine side of things in the main rings.
Susan Oakes is going to give  demonstration of jumping Side Saddle on  Sunday 22nd July  in the Main arena  it would really add to the occasion if any one interested in giving a simple flat display riding Side Saddle in your normal habits could contact either Amie Garrigan or the honsec@ssaireland.com  as soon as possible so that it could be organised to meet up on Sunday 22nd at Newbridge House. The House is very close to Donabate Village and signposted from the M1 / N1 Dublin-Belfast just north of Swords. 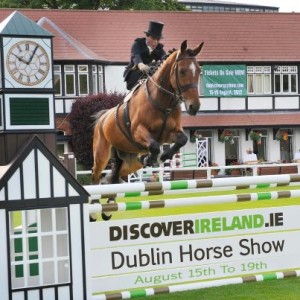 Susan Oakes attempting to break the World record, which has remained unbroken since 1915.
Photo shows Susan Oakes jumping 1 m 50 at the launch of the Discover Ireland Dublin Horse Show.
She is riding Crannagh Clover 11 year old gelding supplied by Kinane Bloodstock. She is trained by renown show jumping coach Paraic Geraghty.
This Duo will be attempting to break the World Record for the highest jump side saddle at 6’6″ (2m) which has stood since 1915.
This record attempt will happen on the 28th July 2012 at Aintree Racecourse.

There is a week long festival taking place in Tipperary to mark the Centenary of the song ‘It’s a long way to Tipperary”.  The Side-Saddle Association has been asked to put on a side saddle parade/display at Tipperary Racecourse on Saturday 14th July which will be a ‘Vintage Day’ at the track.  Side Saddle riders will enter the parade ring between races and there will be commentary to explain side saddle and promote the Association.  Weather and ground permitting the Side Saddle riders may be allowed out onto the Race Track and parade in front of the Stand.Ciara Ryan is the main organiser in this parade.The display in tipperary racecourse is going to be on at approx 4.15 on Saturday, we will have further details tomorrow. Please ring Ciara on 0872266321 if you are interested in joining us for the display.